by NigerianCanadianNews
in News, Technology
0 0
0

This image was posted to MacRumors by a user nicknamed iBoost621

All the way from China, the home of most of the world’s electronics including smartphones, a young startup, Moxi Group is putting down plans to begin selling the world’s first bendable/foldable smartphone. 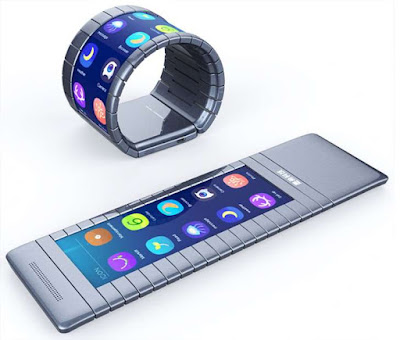 The company which is based in the Chonquing Province, reportedly stated that it is planning on shipping about 100,000 units of its highly-flexible devices in China by the end of the year with each unit going for ¥5,000 or its $670 equivalent.
Basically, the device is built to look like a long and thin smartphone when unfolded, having a flat screen and large built-in battery at the bottom line. The unibody design will allow the device to bend all the way round, just like a bendable bracelet which users can wear on their arms (based on image renderings).
According to NewFoxy, the China-made device’s screen apparently uses graphene, a futuristic material first developed in the UK which is light, thin and very conductive. Although prior before now, there have been flexible devices as the advent and trend isn’t a new one, but the Moxi device would be the first commercial and consumer-ready phone in the world. It’s further reported that the first units would feature a black and white screen which doesn’t strike a good impression.
Accordingly, the screen is said to be an e-ink display, the same kind used in e-readers like the Amazon Kindle. However, the company has plans to introduce colour screen versions in the near future and would most likely ship internationally.
Post Views: 128
Tags: smartphone
ShareSendShareSend

Google to pay $391.5m settlement in US breech of privacy case

I almost ran away from Nigeria – Buhari